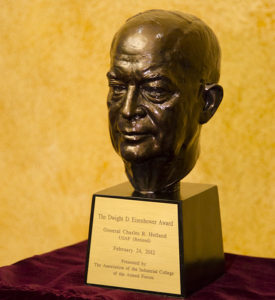 The Dwight D. Eisenhower Award is named after the most illustrious student and instructor at the Army Industrial College. The school later expanded to become The Industrial College of the Armed Forces, predecessor school for what is now called the Dwight D. Eisenhower School for National Security and Resource Strategy. The award is bestowed only to those who have made exceptional contributions to the integration of technological and industrial resources of the nation for a strong U.S. national security and industrial base — a principal goal of ICAF and now ES.

To quote President Dwight D. Eisenhower, “It is my conviction that the educational programs conducted by the Industrial College are of the greatest importance in developing the kind of enlightened military and civilian leadership our Nation must have if its purpose and security are to endure.”

The Alumni Association is a non-profit 501(c)3 professional association, with a purpose to enhance the prestigious educational experience of ICAF/ES. And the awardee meets the following criteria:

Individuals who have received the ICAF Dwight D. Eisenhower Award include:

The search committee has selected two ICAF graduates – both retired four-star general officers who are current D.C. businessmen – to be considered for the final selection of this award. The IKE Dinner Committee will plan and execute the 2018 award dinner and transition the planning for a 2020 IKE Dinner.

If you are interested in volunteering, please complete the form below and let us know!